The night before New Year’s eve we heard animal sounds coming from our attic. Our immediate thought was: Raccoons! Our second thought was: how to get rid of raccoons in the attic? Our third was: how much is this going to cost?

Our first encounter with raccoons was the summer we moved in when we tried to clean up and keep them off our back roof. We have since cleaned up after them twice and still have not managed to keep them away. It doesn’t help that they seem to really love their home inside the roof of the neighbour’s garage, so are constantly nearby.

We just had our roof and aluminum replaced this summer so if the raccoons were in our attic either they had managed to tear off the new vents/sofit to gain access or they were getting in through an access point in the roof of one of our two neighbours (the joys of being in the middle!). After looking up pest control/removal companies using HomeStars we decided to use Gates Wildlife Control. Not only did they have extremely positive reviews, but the owner actually responded to the comments left by customers, they promote a humane process of animal removal rather than traditional trapping and are one of the few companies that offer a free estimate based on their initial site visit. We called and scheduled an appointment for the first time they had available – two days later. When booking the appointment we were told the technician would examine the exterior for access points and because we were attached on both sides would need to look at the roofs of both neighbours.

Although we haven’t had much interaction with our neighbours, we do exchange pleasant hello’s when we see each other coming or going so we thought the best way to notify them would be a letter explaining what we were planning and inviting them to call us if they had concerns. This proved very helpful as we found out from one neighbour that they had animal control two years prior and had secured access points on their roof. We did not hear from the other neighbour.

The technician arrived exactly on time and listened to our concerns and went up right away to look at the roof. You can imagine the relief we felt when he told us our roof was completely secure from the outside and he had found an access point on our neighbour’s roof (the one we had not heard back from about our letter). Chris and the technician went to the door to inform them of the findings. Luckily they were willing to have the technician begin the process to safely keep the animals out. He installed a one way door over the access point and will return in a few days to check that the animal has left and then seal up the access.

We are lucky that none of our new roof and aluminum work was damaged and that our neighbours were willing to cover this cost since the animals were gaining access through their property. The technician from Gates also left an estimate to have the other neighbour’s garage roof repaired as well. Hopefully they go through with the work.

Living close to downtown does have the disadvantage of having to deal with raccoons in near proximity and will likely be a constant battle of comfortable co-existence (just stay out of our attic!). 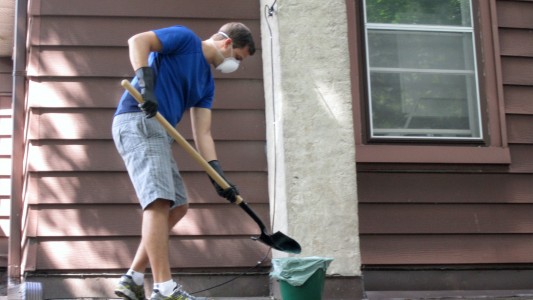 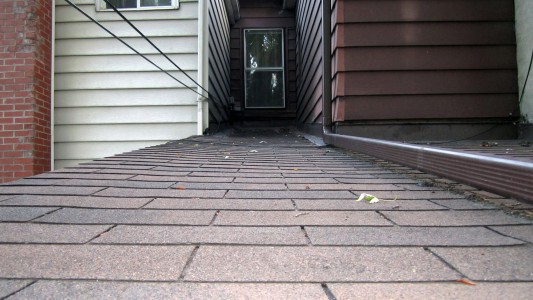 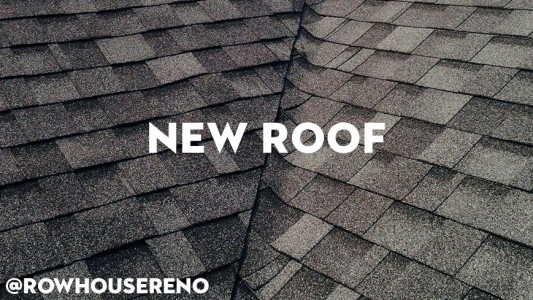